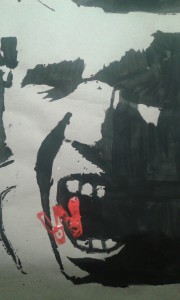 After we received subvention for our project (Grundtvig – Adult Education Project) we decided to change our approach to the theatre in jail.
So far we had been focusing on a more pedagogical aspect, on being present in the actual institute. The artistic side was secondary. We made theatre with prisoners.
In this project we wanted to make a play with civil actors. A play which speaks directly to the prisoners with its content and form.
In the second half of this process we “extend” this play, involving prisoners as actors.

During the summer of 2013 in Grenoble I saw Woyzeck directed by Francois Jaulin. After the play I discussed a whole night with him.
Even though it was a strong visual experience it didn’t reveal the actuality of the drama for me,
but it might have been because of problems of understanding French. The drama started to interest me seriously.

We realized soon: that was an ideal piece for us. It can be interpreted with freedom due to it’s sketchy structure and it’s plot talks about very actual problems strongly related to the present of Hungary.
During the projects of the last years we have learned a lot about deep-poverty, so these experiences could be the base of our play.
We asked Éva Bús to help us with the script, keeping the structure of three different parts and not focusing on the murder itself or the story but the relation of the individual and the “milieu”.

We have also studied some researches about the poverty as Kosztolányi and the poverty written by Péter Balassa which says poverty is mute, as it’s not able to conceive itself, it can not make its own voice heard.
The other statement we found very useful was that poverty is a very close state to the base of existence.
This made us to think even stronger that it’s an adequate environment to research one of the most fundamental element of human being: the violence.

We also got inspiration from the book of Horacio Czertok (Theatre in Exile) which was translated to Hungarian by Géza Pintér during the last project of theatre in jail.
Violence is an unalienable part of our being and the possibility of an act Woyzeck did, is in each of us. Circumstances make it come to the surface.
We also use some parts of this text in our script.

We performed two dress rehearsals in Leőwey K. High School. The first one, for professionals (drama pedagogues, directors and the Osonó company), the second one, for students of the high school. 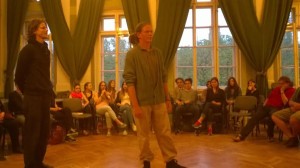 We performed the premier in Ferrara, Italy, where we were participating in a workshop. On this meeting we saw performing  Theatre du Fil and Theare Nukleo. 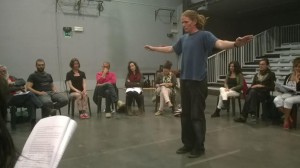 Pécs TV made a report on us for their show called “Pécsi Kör”: